It’s the first Wednesday of the month, which means it’s time for our group posting for IWSG. Insecure Writer’s Support Group is the brainchild of Ninja Captain Alex J. Cavanaugh, and his co-hosts for August are Nancy Gideon, Bob R Milne, Doreen McGettigan, Chrys Fey, Bish Denham, and Pat Garcia! Thanks for all your hard work!

Taking time off from blogging is rough. You come back and then you wonder, what do you write about, and would anyone even care? I suppose that is one of my major fears and insecurities… what do I have to say and does anyone care? Maybe it’s an insecurity shared by every writer, or maybe I’m caught in a purgatory that is all my own…

I realized my brand of writing was 70% staring/procrastinating and 30% writing, which means I’m not very productive, even when it comes to something as simple as writing a blog post. And that’s what mostly accounted for my being MIA. I had some things come up, and well, blogging just became the thing that had to go, at least for a while. I’m still doing rewrites on my WIP, “Lost,” though, so I haven’t totally been unproductive writing-wise. And as I continue chugging along there while riding the crazy waves of that thing called real life, I’ve decided to continue my blogging break for a month or so. But of course, I just can’t make this post and NOT share some music. See you in Sept!

First of all, thanks so much to CeeLee for nominating me for The Lighthouse Award. It is such an honor to get it.

A Blog That Brings Light To A Dark World … wow. I’m not really sure my blog deserves such a distinction but it certainly gives me something to aspire to. I made this post a while back about what writing meant to me and how that one person is enough to make it worthwhile. Receiving this award definitely makes me feel all sorts of fuzzy!

Now for the Rules:

Three ways me and my blog help others:

My nominees for this award are: 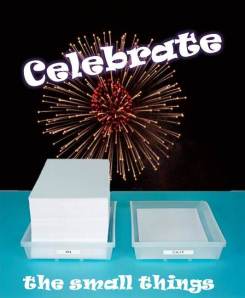 Celebrate The Small Things is a blog hop wherein we post our celebrations (big and small) every Friday. Thanks to our host VikLit for this awesome hop!

It’s the last Friday of the month (time flies by so fast!) and I’m here to celebrate:

What are you celebrating this week?

First of all, huge thanks to TCC Edwards for nominating me for this award. I generally don’t like the concept of “chain mail,” which according to the official Liebster Award site, is pretty much the kind of award this is but I’m gonna be a Yes! girl and play along.

I’m also opting to go with the rules my nominator used, with the exception of going with the less than 1000 followers from the official rules instead, so I could include some of my nominees that just missed the 200 mark. However, in the spirit of the nature of the award, I have picked fairly new blogs and/or those with not much followers, which leaves me with these rules:

The questions I got from TCC:

1. If you could rewrite the end of any movie, what movie would you choose?
A: SPOILER ALERT if you haven’t seen Frozen
Off the top of my head I’d have to say Frozen. I thought the ending was a bit rushed and the whole Anna/Kristoff thing doesn’t work for me. Their connection seemed lacking and it being a Disney film I felt that’s one thing that should’ve made sense at least.

2. What theme do you wish more fiction tackled?
A: Hope/Hopelessness

3. Have you ever witnessed or been in a natural disaster?
A: I don’t know if it counts but when I was a kid, a volcano erupted about 150km from where I lived. I remember everything being covered in volcanic ash for days.

4. If you could go to a bar (or coffee shop) with any fictional character, who’d you choose for your drinking buddy?
A: Gandalf. I’m sure he’s still got some great stories left to tell!

5. What’s a common trope in fiction that really bugs you when you recognize it?
A: I’m actually OK with tropes, as long as they’re handled well. I think it really depends on the kind of book I’m reading and my expectations based on the genre.

6. Have you ever tried writing something completely out of your comfort zone? (For example, if you never wanted to be a poet, but tried writing poetry anyway.)
A: I had to write a poem for one of my classes. Needless to say, I sucked. Never tried it since.

7. Was there ever a book you just couldn’t finish? Why not?
A: There’s quite a few of them actually but no titles come to mind at the moment. If the first few chapters just drag on with not much happening I find myself losing interest and just abandoning the book. So yeah, a book has to get me in those first few chapters or I’m gone.

8. Which author (living or dead) would you most like to meet in person?
A: Ernest Hemingway

9. What was your least favorite book assigned to you in school or university?
A: I can’t think of any

10. It’s Halloween and money is no object! What character would you dress up as?
A: Aerith from Final Fantasy 7

I’m passing on the award to the following people:

My questions for them:

It’s Friday, which means it’s time for Celebrate The Small Things! Hop on over to our host Viklit‘s blog for more info and join in the celebrations!

First off, it’s been a crazy (and not in a very good way) last couple of weeks. I missed posting Celebrations last week (I know, I suck) and to further prove my point, it seems I’ve been nominated for the Liebster Award by TCC Edwards some days ago and completely missed it. Yeah, I double suck. LOL

I’m supposed to answer some questions and think up new ones for my nominees, which isn’t as easy as it sounds, so I’ve decided to take the next few days to come up with my questions for the award before making the post.

So for my celebrations this week: